As Venezuela’s farms and factories falter, the country struggles to feed its people 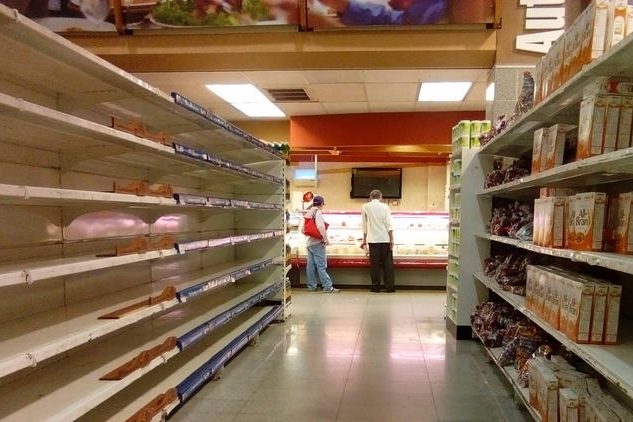 Just a decade ago, Venezuela was producing nearly all of the sugar it needed.
But this week, 30,000 tons of imported Guatemalan sugar is being offloaded at the port city of Puerto Cabello for delivery to government-run supermarkets across the country, where desperate shoppers typically line up for hours to buy basic foodstuffs.
In some ways, the sacks of sugar being lowered on pallets to waiting trucks at Dock 10 symbolize the plight of a country that has seen the production of sugar and other products plummet. Venezuela now imports 80% of all the sugar it consumes, and many economists say 17 years of socialist policies are to blame.

Last year,  the country produced 242,306 tons of refined sugar, less than one-third of  the 740,000 tons produced in 2006 when the country came close to meeting annual consumer demand of 900,000 tons, according to figures from Fesoca, the Venezuelan sugar trade association.  (…)
Maduro insists it’s all the fault of an “economic war” waged by the United States. Juan Pablo Olalquiaga, president of Conindustria, the largest trade group of Venezuelan manufacturers, counters that industry has been decimated by nationalizations, government-imposed price and currency controls, as well as difficulties in obtaining component parts or materials to make things.  (…)
“Two decades ago, Venezuela had 12,700 industrial companies,” Olalquiaga said. “Only 4,000 are left….The government of President Maduro has been absolutely incompetent in taking correct policies and so the deterioration of the few companies left has continued.”  (…)          Leer más